The Record of Elections volumes document candidates and ballot measures, and their corresponding results, for general and special elections, including local, state and federal elections. In some instances, voting results are specified by political party.

List of candidates for State Representative for the 18th District. Includes candidates in the Prohibition Party, Socialist Party, Progressive Party, and Independent.

Lists candidates for electors to serve in electoral college for 1920 presidential election.

Photographs documenting the activities of the Elections Division office. 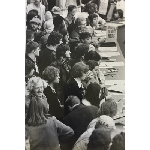 Photograph of a crowd of people waiting to register to vote. A sign on a table reads "Register to Vote Here."

Black and white image of Hubert B. Humphrey in 3/4 profile head and shoulders shot wearing a dark suit, light shirt and light and dark striped tie.

Black and white head and should shot of Lyndon B. Johnson wearing a dark suit, light shirt and diagonally striped tie.