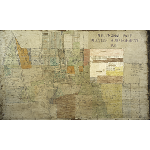 This map shows how crops, gardens, and animal enclosures were arranged at the Multnomah County Poor Farm in 1938. Buildings and structures are outlined where they appear. The arrangement overlays a base map created by Multnomah County in 1928. Series serves primarily as an index to the Edgefield Admissions Register (see series 10). Index cards include resident name, admission date, discharge date, case of death, and occasional personal information. The two volumes (1900-1908)) are indexes to volumes 1 and 2 of the Edgefield Admissions Register and also include recipes for drugs and treatments in the face pages.