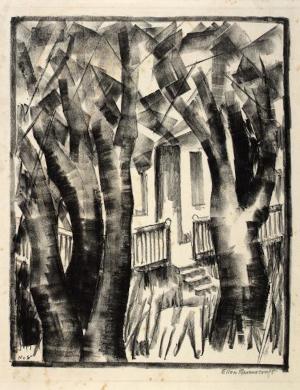 One thing is certain: a woman named Ellen Ravenscroft registered to vote in Multnomah County in April, 1913.

The discovery of Ravenscroft’s voter registration card occurred by happenstance. The Archives undertook a small project to identify women who had registered to vote in the period between 1912 and 1920, the eight years bounded by Oregon’s removal of gender restrictions on voting and the national adoption of suffrage. While sifting through cancelled voter registration cards, a member of the project team noted that the name on one of the cards matched that of a prominent American artist. Research commenced to see if the card indeed belonged to the artist.

What followed is a demonstration of the limits that archival records can have in telling a unified and complete story. But it also illuminates the power of these same records to engage curiosity in the broader, more vibrant narratives behind their dry matters of fact.

In April 1913, Ravenscroft was one of the initial wave of women who registered to vote in Oregon. It was not uncommon for registrants to indicate that they were of legal age rather than provide their actual age. While her card says she was 21, other primary sources have an assortment of birth dates that dispute this. She was most likely in her mid-thirties when she lived in Portland. Articles in The Oregonian from that time report that between 1910 and 1914 she was teaching at St. Helen’s Hall and exhibiting art in and around Portland, as well as Nehalem and Neahkahnie. Her style was identified as modern post-impressionism. Ravenscroft socialized with a progressive circle of friends, which included Helen and Carl Walters and, quite possibly, Multnomah County Library’s Mary Frances Isom. 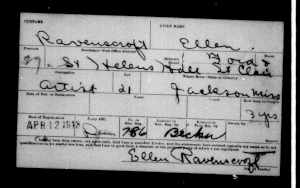 What is clear about Ellen Ravenscroft from the archival record is that we can gain an impressionistic view of her life but not a definitive one. She was quite mobile. Census records reveal that she was born in Jackson, Mississippi and then lived in New York City in 1910 and St. Louis, Missouri in 1920. She was also active in Provincetown, Massachusetts during the mid 1920’s. By 1940, she had returned to New York City, where she was a founding member of the New York Society of Women Artists, of which she served as president in 1941. She died in New York City in 1949.

Ravenscroft was a respected artist in her time. She won awards, exhibited modern works for nearly 50 years, and helped found a society for women artists. We know little about her politics, but what evidence exists suggests a progressive bent. Her precise age remains a mystery, and maybe always will. Ellen Ravenscroft’s story, prompted by a simple voter registration card, is an intriguing one. It draws us in to pursue deeper detail and enriches our perspective of the era when women first took the right to vote.